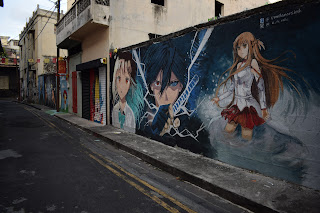 Street Photography It's a genre of photography  that records everyday life in a public place. The very publicness of the setting enables the  photographer  to take candid pictures of strangers, often without their knowledge. Leading lines have been use to make the eyes go through the street till the end so as to see all the art works.  The lines lead to the end of the street. Rule of third is used to focus on the first art work and the lines lead to the end of the street . The composition is asymmetry. The symmetry of the composition put focus on the artworks. Portrait Photography  It is a type of  photography  aimed toward capturing the personality of a person or group of people by using effective lighting, backdrops, and poses . Natural lights. Catch lights and natural lights . Natural backlight. Underlighting. Underlighting. Still Life Photography Still life photography is a genre of photography used for the depiction of inanimate subject matter, typically a small group of obj
Post a Comment
Read more

EVENTS IN 1900 THAT HAD IMPACT ON GRAPHIC DESIGN.

July 07, 2020
Here are some events that have influence the world of graphic design in the year 1900. The US secretary of the state, John Hay announced the open door policy, to promote American trade with China. The United Kingdom and United States sign a treaty for the building of a central American shipping canal, across America in Nicaragua. These two events increase the amount of trade being done all over the world. This cause a collision in culture, design, fashion and way of living of the Asian, European and American country. Graphic design had to change and adapt with all the new trends which were imported. Women in Germany demanded the right to participate in university entrance exams. In France the length of a legal workday for women and children is limited to 11 hours. When women started going to the university and work, the design of their clothes changed to better suit the new situation they were in. The first Auto show in the United States opens at New York city’s Madison Square Garden
Post a Comment
Read more